Proving he was a footballer before a superstar

Twelve years have passed since David Beckham completed his first loan move to AC Milan. The switch was unusual, but it proved that Beckham still cared deeply about the game.

When David Beckham signed for LA Galaxy in 2007, it was hard to see the move as anything more than a commercial decision.

Because while the MLS project was clearly exciting for Beckham the businessman, it did not seem to offer much of a footballing challenge to Beckham the player. Rather, the 31-year-old appeared to be heading for an early retirement.

But just a year and a half after signing for Galaxy, a 33-year-old Beckham was on his way back to Europe. Not to fully abandon his $250million Galaxy deal for good but to join Italian giants AC Milan on loan during the MLS off-season.

The deal made sense for all involved: Galaxy could temporarily lower their wage bill, Milan got themselves a star player, and Beckham, crucially, got the chance to prove his value to the English national team.

A decade on from that first Milan move (the midfielder would return the following year for a second spell), Beckham’s sojourn in Italy remains hard to assess.

At first glance, Beckham’s move to Milan appeared just as money-driven as his move to LA Galaxy.

That was mostly Milan’s fault. When rumours of the transfer began to circulate in December 2008, Milan vice-president Adriano Galliani described the deal in less-than-romantic terms.

“Football today is about full stadiums and sponsors and superstars like Beckham fill them up,” Galliani said. “With him, Kaká and Ronaldinho, it will be a dream team.”

Certainly, that trio was a dream team for the San Siro ticket office. But Galliani’s comments didn’t say much about what Beckham could offer on the pitch.

In fact, Milan already had some of the finest creative midfielders in the game, including Andrea Pirlo and Clarence Seedorf, as well as the “dream team” Brazilians.

Arranging the superstars into some kind of tactical order was the responsibility of Carlo Ancelotti, who said he was excited to work with “a serious athlete” and “great professional”. But it was still not obvious how Beckham would fit into his team.

Understandably, journalists were keen to press him on the matter.

“Milan have often started winning cycles by playing many offensive players together,” Ancelotti noted. “It’s necessary for everyone to sacrifice themselves, but it’s certainly worth a try.”

True to his word, the Italian tried it sooner than anyone expected. Although Beckham hadn’t played a competitive game for two months, he was thrown in at the deep end, making his debut away at Roma on January 11, 2009.

Ancelotti went gung-ho: Beckham lined up alongside Pirlo and Seedorf in central midfield, Ronaldinho and Kaká played ahead of them, and promising teenager Alexandre Pato led the line.

The match finished 2-2, with Beckham putting in a decent showing.

Ancelotti revealed he had picked Beckham earlier than expected “because he demonstrated he was a very intelligent, serious and balanced player”. The midfielder, he said, had also “inserted himself well in our group”.

But it didn’t take long before that “seriousness” turned into something a little more fun.

On January 25, in his third match in Italy, Beckham scored his first Milan goal, the final strike in a 4-1 win over Bologna.

The manner of the goal was as weird as seeing the Englishman in a Milan shirt: after being played in by Seedorf, Beckham struck the ball with the outside of his boot. Beckham was back, but he had a few new tricks up his sleeve.

That game marked the start of a purple patch.

Just three days later, in a home match against Genoa, he had his second goal — one that was much more on-brand.

In the 33rd minute, Beckham took a free-kick from a seemingly un-shootable angle, bending the ball into the near corner like only he could do.

After the match, which finished 1-1, Ancelotti said Beckham had enjoyed “another great game”. More importantly, praise was forthcoming from another Italian manager, England boss Fabio Capello.

“I was happy with Beckham’s performance,” Capello said. “He seems well integrated in the Milan team.”

If Beckham’s Milan switch was primarily an attempt to woo the England boss, it seemed to be going to plan.

To some extent, Beckham’s Italian job was a success. After joining Milan in January 2009, he earned call-ups for five of England’s six remaining World Cup qualifiers.

By December 2009, ahead of the second loan, his place in the national side seemed secure.

“If he plays well and is fit I will include him in my squad [for the World Cup finals],” Capello said. “He’s serious, he’s a great professional and he’s crazy about the World Cup.”

By March 2010, however, those comments became redundant. Beckham tore his Achilles tendon in a match against Chievo, ruling him out of the World Cup and ultimately ending his international career.

Italian football had helped him into Capello’s plans, but his body had betrayed him.

Nor was the injury the only negative aspect of Beckham’s time with Milan.

During his first Milan stint, Beckham gravely offended LA Galaxy fans by extending the loan beyond the initially proposed duration. The extension resulted in him missing a big chunk of the 2009 MLS season.

When he eventually returned to the Galaxy team in July 2009, he was jeered and subjected to taunts from his own fans. He responded by attempting to confront members of the crowd, and the relationship between fans and player remained tense for some time. 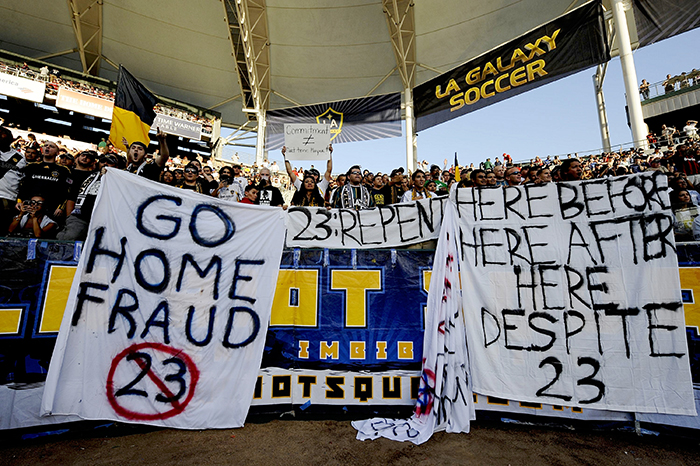 But while Beckham in Milan failed to result in Beckham at the 2010 World Cup, the unusual loan move did go some way to improving the player’s reputation among football’s more critical observers.

If the Galaxy switch had signalled the player’s inevitable drift into matters beyond football, the Milan loan was a sincere attempt to claw his way back into the game. His motivations could hardly be doubted: the 2009 loan extension was made possible by Beckham paying some of his own wages.

Ultimately, Beckham did not help Milan to any notable successes — they finished third in Serie A in both of his seasons there — nor did he help himself to a final World Cup appearance.

He did, however, achieve something of value.

By giving up holidays and wages to play in a competitive league, Beckham proved once and for all that he was a footballer first and a superstar second.

READ NEXT: A tribute to David Beckham, England’s man for the big occasions