Sir Alex Ferguson won 36 trophies during his 26 years at Manchester United – but it has been suggested he left the club with a squad only he was capable of managing to success.

United’s success under Ferguson was in no small part due to the Scot’s ability to spot a player, which saw him lure future legends like Eric Cantona, Peter Schmeichel and Cristiano Ronaldo to the club.

However, Ferguson certainly didn’t get it right every time, and that was perhaps particularly true towards the end of his reign. Here, we’ve ranked his last 20 signings for United from worst to best.

The Serbian arrived at Old Trafford in January 2009 for £7million but failed to make any kind of impact during his short time at the club, making just two Premier League appearances.

“I was put straight into the first-team squad and the levels were so high that it felt like another sport,” Tosic told The Athletic in October 2019.

“It was very heavy for me in those first weeks in Manchester. The ball moved so quickly in training, the quality was top, top, level. Nobody lost the ball. Except me. I was trying my best but it wasn’t enough. This wasn’t the football I knew.”

The Chilean looked like a serious prospect for the future when Ferguson signed the striker from Universidad de Chile in 2012.

However, he failed to make the grade in England and ended his United career without making a single first-team appearance before joining Dinamo Zagreb in 2015.

In fairness, he does have a Copa America winners medal to his name and currently plays for Brazilian Serie A side Fortaleza.

But this has to go down as one of Fergie’s most forgettable signings.

United splashed out £3million to sign Rodrigo Possebon from Internacional in 2008, the Brazilian arriving as a highly rated young midfielder.

However, after a promising start to life at Old Trafford, Poissebon suffered a serious injury in a League Cup match against Middlesborough and was never really the same player after that.

United hoped that they had found the next Ole Gunnar Solskjaer when they signed striker Mame Biram Diouf from Norwegian club Molde in 2009.

The striker scored on his home debut, but that was about as good as it got for Diouf at United and he was sold to Hannover 96 in 2012.

It turned out United had not found the next Ole Gunnar Solskjaer – although we cannot rule out the Senegal international returning to the club as manager in the future.

Bebe will go down as Ferguson’s strangest and most infamous signing, with it emerging that United bought the unknown winger in 2010 even though the manager had never seen him play.

The Portuguese kid had gone from living in an orphanage in Lisbon to playing for one of the biggest clubs in the world in a matter of months.

Unsurprisingly, it soon became apparent that Bebe was out of his depth, and he made just seven appearances for United before signing for Benfica in 2014. But he scored two goals in those seven games and did actually briefly look quite good.

READ: Remembering when Sir Alex Ferguson broke his own rules to sign Bebé

Powell seemed destined for a bright future after coming through Crewe’s academy, signing for United and scoring on his Premier League debut.

However, the midfielder failed to live up to his potential and his time at United is best remembered for when Louis van Gaal subbed him on for Juan Mata in an important Champions League game.

United lost and Powell disappeared without a trace.

The defender hadn’t even made a first-team appearance for Stoke City when he made a shock move to United in January 2009.

De Laet mainly played for the club’s reserve team and only made six first-team appearances before leaving United in 2012. He did go on to pick a Premier League winners’ medal with Leicester in 2016 – more recently than any other United player.

An A-League screamer from one of the unlikeliest of sources…

Zaha proved to be Ferguson’s last ever signing, but the winger never got to play under the Scot, who retired before Zaha arrived at the club.

Instead, Zaha was sidelined by David Moyes, making only four appearances in all competitions before being loaned out to Cardiff City.

Zaha has since rebuilt his career back at Crystal Palace but the suspicion lingers that he’s best suited to being a big fish in a medium-sized pond.

Obertan hadn’t even established himself in France when United brought him to England in 2009, and even then-Bordeaux manager Laurent Blanc was shocked by the move.

“I was surprised, but it is an unexpected chance for him to play with one of the best clubs in the world,” he said.

“Manchester United have been tracking him for a long time. They certainly hope to advance him, something that Bordeaux and Lorient have failed to do.”

United should have listened to Blanc’s advice as Obertan scored just one goal for the club before being sold to Newcastle as part of their cut-price French Revolution.

Buttner made a remarkable start to his United career, scoring a brilliant solo goal on his debut against Wigan and winning the Premier League in his first season.

He was tipped as the long-term replacement for Patrice Evra, but when Ferguson left he found chances in the first team a lot harder to come by.

The left-back was sold to Lokomotiv Moscow in the summer of 2014 and he’s done nothing to prove that United made the wrong decision.

It’s hard to believe now, but there was once a stage where Lindegaard was United’s first-choice goalkeeper ahead of David de Gea.

United bought Lindegaard from Norwegian club Aalesunds FK for £3.5million in 2010 and the shot-stopper had a promising start to life at Old Trafford.

“Eric Steele came to me at Carrington and said: ‘The gaffer is very happy with you. You’re going to play the rest of the season in the Premier League,” he told The Guardian in November 2021. “‘David [de Gea] is going to play in Europe.’

“I was thrilled but in training the same morning I was punching a ball over a mannequin and got my foot stuck and twisted my ankle. I lay on the ground and started crying – my whole world was falling apart.

“I was out for the rest of that season. The next one, I couldn’t jump off my right foot. My kicking was horrendous. I was not mature enough to say: ‘My ankle is not right.””

Lindegaard was eventually demoted to being De Gea’s back-up, and he joined West Brom in 2015.

When United signed Kagawa in 2012, it looked like a real coup for the Red Devils as the midfielder had thrived in the Bundesliga with Borussia Dortmund.

Despite showing glimpses of his talent – including a brilliant hat trick against Norwich – the Japan international struggled to adapt to life in the Premier League, and he returned to Dortmund two years later. 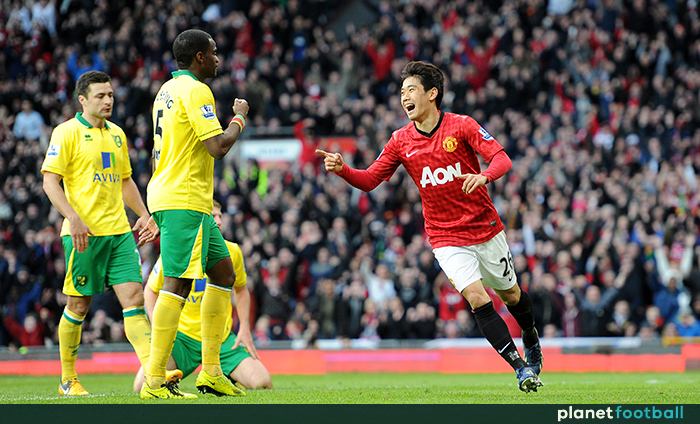 READ: Shinji Kagawa, one of the calmest hat-tricks ever & what could have been

After seeing him impress for Blackburn, United beat a number of other clubs to secure Jones’ signature in 2011. The defender quickly established himself as a United regular and Sir Alex was full of praise for him.

“Jones, arguably the way he is looking, could be our best ever player,” said Ferguson.

“I think Jones may be one of the best players we have ever had, no matter where we play him. At 21 years of age, he is going to be a phenomenal player.”

Things haven’t quite gone to plan for Jones since and we think Sir Alex might be regretting that comment.

Less than a year after he made his Premier League debut for Fulham, Ferguson signed Smalling for £10million in January 2010.

Smalling also won the Manchester United Players’ Player of the Year award in 2016, but that didn’t stop United from flogging him to Roma in 2020.

United signed Young from Aston Villa in 2011 as an exciting winger and the England international endeared himself to the supporters with brilliant goals against Arsenal and Spurs in his debut season.

As his spell at United progressed, Young reinvented himself as a full-back and had a spell as United’s captain, though his usefulness to the team was on the wane at the time.

Young moved to Internazionale in January 2020, winning the Serie A title, before returning to Villa last summer.

Valencia was always going to struggle to fill the Cristiano Ronaldo-sized void at Old Trafford after signing from Wigan in 2009, but he proved to be a shrewd signing.

The winger was even given United’s No.7 shirt in 2012 although he struggled with the pressure and reverted back to his old number a year later.

During his 10 years at United, Valencia won the Premier League, FA Cup and Europa League as well as the Manchester United Players’ Player of the Year award in 2012 and 2017.

United famously hijacked Manchester City’s bid to sign Berbatov from Tottenham on deadline day in 2008, with Ferguson meeting the Bulgarian at the airport.

When you consider that Berbatov was the United manager’s most expensive signing, his time at Old Trafford may seem a little bit underwhelming, while his infamously laid-back nature frustrated some fans.

However, he produced several memorable moments, won two Premier League titles and scored 56 goals in 149 games for United, so it clearly wasn’t that bad.

After the disastrous 2009 window, people were starting to question if Ferguson had lost his touch in the transfer market – but the manager soon proved that he could still find some rough diamonds.

United signed a budget-priced and unknown Javier Hernandez from Chivas de Guadalajara for £7million before the 2010 World Cup.

The super-sub had an immediate impact, scoring 20 goals in his debut season before netting another 12 and then 18 goals over the next two seasons.

But Ferguson’s departure marked the beginning of the end for Chicharito at United, and he left the club in 2015 before a bizarre spell at West Ham.

After United lost out on the title by goal difference in 2012, Sir Alex Ferguson bought himself the perfect leaving gift in Van Persie.

The Dutchman spent three years at Old Trafford, but it was his form in that first season which made him worth every penny, as he fired United to their 20th league title.

A hat-trick against Aston Villa in the second half of that season – including the volley featured below – was a particular highlight.

The goalkeeper was signed from Atletico Madrid for £18million to be a replacement for Edwin van der Sar, but initially he looked like a flop as he was easily bullied off the ball in the air.

But Ferguson kept his faith in the young Spaniard and De Gea gradually began to establish himself in the team during the manager’s final season at Old Trafford.

The 31-year-old has since gone on to establish himself as one of the best goalkeepers in the world – although that reputation has taken a hit over recent years – and one of Ferguson’s best bargains.

READ NEXT: Remembering when Sir Alex Ferguson broke his own rules to sign Bebe

The closest three-team pole battle in Singapore since 2003 · RaceFans

Josh Warrington was delighted to meet Luis Alberto Lopez in his hometown of Leeds.

Josh Warrington was delighted to meet Luis Alberto Lopez in his hometown of Leeds.